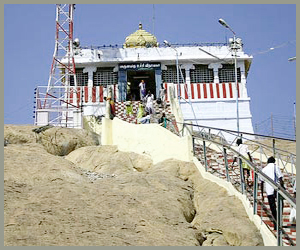 Though Vibhishana and Ravana were on opposite sides of the Ramayana war, their failed quest to take the Lord’s supreme form back to Lanka is almost identical. After killing Ravana, Lord Rama gifted Vibhishana an idol of Lord Ranganatha, cautioning him that it would take root wherever it was placed.

Though an ardent devotee of Rama, Vibhishana was Ravana’s brother and an asura (demon), so the gods entreated Lord Vinayaka to stop him. On his return to Lanka Vibhishana passed through Trichy and seeing the beautiful Kaveri River, wished to take a holy dip and perform his daily rituals. Lord Ganesha appeared as a young cowherd and offered to hold the idol while he bathed. The moment Vibhishana stepped into the water Vinayaka put the idol on the sandy banks. A livid Vibhishana chased after him, but the nimble cowherd ran up a hill by the riverside. Vibhishana finally caught up with the boy and hit him on the forehead.

When the boy revealed his divine form, Vibhishana apologized and left empty-handed to Lanka. Thus the rock where Lord Ganesh escaped became the Ucchi Pillayar temple or ‘Lord Vinayaga on the hilltop’ and the place where the idol took root became the Sri Ranganatha Swamy temple at Srirangam. Steps tunneled through the rock lead to the Ganesha temple on the hill, accessible by another steep flight of steps carved on the rock face, offering panoramic
View More Ganesha Pilgrimages
Quick Links
Copyright © Jai Ganesh Deva. All Rights Reserved.