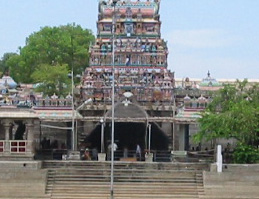 Karaikudi (Ramanathapuram District) : Pillayarpatti or Karpaga Vinayakar temple. This image of Ganesha is familiar to anyone of Tamil origin; however, only a few know that this image is found in the rock cut Karpaka Vinayakar Shrine at Pillayarpatti near Karaikkudi, one of the oldest Cave Temples (Rock Cut) temples of Tamil Nadu. Situated between Karaikkudi and Pudukkottai, Pillayarpatti is named after "Pillayar", the Tamil name for Ganesha. This ancient temple also houses rock cut images of Shiva, Lingodbhava and others.
Deities : Karpaka Vinayakar or Desi Vinayaka Pillaiyar is the presiding deity; he is portrayed with two arms and a trunk curled towards his right in the valampuri mode. This six feet tall image of Ganesha is a bas-relief in a cave excavated from a big rock, now behind the temple. Tiruveesar is a Shiva Lingam carved in a similar manner. Other deities in the temple include Marudankudi Eesar and his consort Vaadaamalar Mangai.
Antiquity : Over 15 inscriptions are found within the temple, that help establish the age of the temple. The Stalapuranam published by the temple classifies the growth of this temple into three distinct stages. The first stage goes back in time by about 1600 years. During this period, the innermost rock cut shrines housing Karpaka Vinayakar and Tiruveesar came into being. The uniqueness of the image of Ganesha is one factor testifying this date; the characters used in the temple inscriptions also help establish this date. The pillars within the shrine are of pre-Pallava origin. The Pallavas were prolific builders of rock cut temples (Mahabalipuram, Mahendravadi, Mamandur, Mandakapattu, Seeyamangalam, Namakkal, Tiruchi, Nartamalai, Kudumiyanmalai, Tirukkokarnam, Tirumeyyam, Peraiyur, Malayadipatti, Tirukolakkudi, Kunrakkudi etc.). A number of these can be traced to Mahendravarman I (615 - 630 AD) and Narasimhavarman I (630 - 668 AD). However, the inscriptions at Pillayarpatti date further back to the 4th century AD. Also, given the location of the temple in the Pandya kingdom, it would only be logical to associate Pandya patronage to this temple, especially in the light of Pandya patronage at the Kazhugumalai temple not too far from here. There are several inscriptions within this temple that date back to the period between 1091 AD and 1238 AD, making it apparent that the Pillayarpatti Nagarattar became the custodians of the temple during the 13th century AD during the second growth phase of this temple, when Vimanam and Rajagopuram were built. The third phase of growth is much more recent and it involved the repair, rebuilding and refurbishment of the entire temple complex, including the renovation of the temple tank. The tank and the two Raja Gopuram provide an attractive approach to the temple, in this rather remote town of Pillayarpatti.
Worship protocol : Each day, five worship services are offered to the presiding deity, commencing at 6 am, and closing down at 9 pm. During the fourth phase of each lunar half month, Pillayar is taken in procession around the temple.
Festivals : The grandest of festivals is Ganesh Chaturti in the month of Aug - September, where a ten day celebration brings much gaiety to this temple town. Each day's celebration is marked by much splendor as Pillayar is taken in procession around town on several of his mounts, as are the other Pancha Murthys. The ninth day of the festival is marked by a chariot procession. In addition, the ten day festival in the month of Vaikasi (May - June) is held in honor of Kongu Nachiyamman, a village deity whose processional image is also housed here. The Margazhi Tiruvadirai festival is celebrated in honor of Nataraja and Sivakami (Dec - Jan).