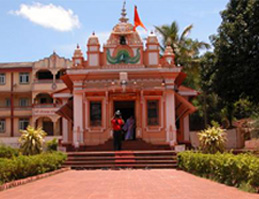 The Marathas were in possession of the Ponda palace in the 17th century. Chatrapati Sambhaji erected Fort Mardangad and camped with his army nearby. He ordered a Gudi to be erected on a hill nearby, known as Farmangudi. Even today, a Gudi is erected here every Anant Chaturthi. About 90-100 years back, a cow herder called Hapo, who was employed by King Soundhekar of Bandiwade, found a 1 ft stone Ganesha idol in the forests. He consecrated it in a mandapa made of coconut branches. The then Chief Minister was inspired to build a new temple here. The work was completed in May 1966. A new Pancharashi idol was sanctified along with the old stone idol in the same temple. The temple is located on the Panaji – Madgaon main road about 3.2 km from Fonda near the foothill